Between Twickenham and Kew it’s possible to fully appreciate the Thames as a river in London. You’re away from roads and in many places buildings. When you reach the borders of Kew Gardens you can crouch by the water’s edge and escape from the urban bustle. 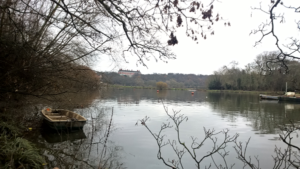 The plan was also to go for a swim but as it had rained there was a high chance that sewage bacteria levels broke bathing standards. There is no comprehensive sewage bacteria testing of the Thames so Theo took a water sample. This had to be incubated for 20 hours. It revealed that e-coli levels at that time and place meant it failed bathing water quality standards. But this delay isn’t much good in working out if you’ll come into contact with sewage when you are there. That’s why we’ve started the campaign A Thames Fit To Swim. Please sign the petition to Thames Water opposite.

In Copenhagen finding out the current water quality is simple. You just have to open the app and the information is on screen.

From Twickenham station it’s a 10 minute walk to the Thames (take care when crossing London Road and King Street). Head down Water Lane and take a short western deviation to Eel Pie Island before heading east for the rest of the hike, following the Thames downstream. Pretty soon you come to Marble Hill Park, featuring the Paladian Marble Hill House, owned by English Heritage. The views across the Thames are iconic as you walk to towards Richmond. At higher tides this footpath can be flooded which means you need to trek inland a bit before crossing at Richmond Bridge. Once on the other side you have to do a little loop off the bridge and down through a small park to go underneath it and rejoin the Thames Path. Richmond was started by the Tudors so has a strong connection with that dynasty.

Soon you’ll be walking past Old Deer Park. It was here that the Meridian Line ran before Greenwich was made the Prime Meridian. George the Third had The Kings’s Observatory built to study the passage of Venus across the face of the sun.

On the opposite side of the Thames, as you reach the edge of Kew Gardens you will see Syon Park. This has the last natural Thames river banks in London and still floods at every high tide.

You’re nearly at Kew Bridge where you cross the Thames and take the short walk to Kew Bridge train station.