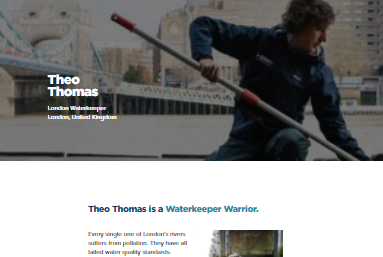 We exposed the number of sewer overflows in the Olympic Park. The story was taken up by The Guardian.

The story of London Waterkeeper.

There are thousands of rivers with swimming status across Europe, but none in the UK. The law is a tool we can use to push for higher water quality standards for rivers.

How often water companies pollute our rivers with sewage is kept from the public. Until we know how often sewers overflow we won’t know when human health is put at risk, or where infrastructure needs upgrading.

To mark the 20th anniversary of Waterkeeper Alliance, the London Watekeeper, Theo Thomas, was featured in its magazine. There are more than 350 Waterkeepers across the planet.

A key part of making our cities more liveable and resilient is the creation of green spaces that act like sponges. London has been nibbled so much that spaces 22x the size of Hyde Park have been paved over.

The Thames at Tilbury has big skies and a dirty secret. London Waterkeeper Theo Thomas and Psychogeographer John Rogers joined Professor Kate Spencer on a walk through this landscape.

A Thames Fit To Swim